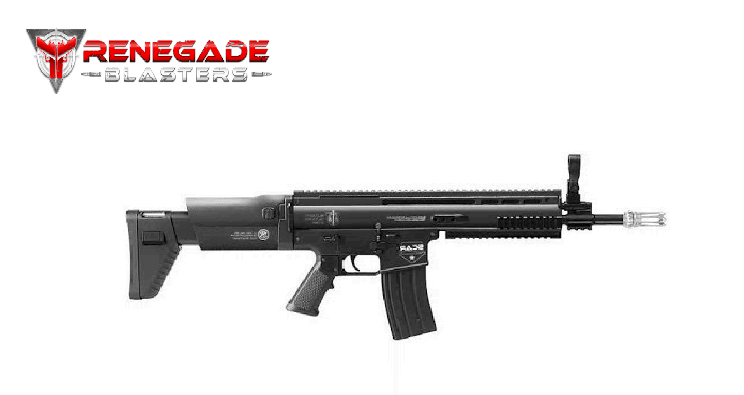 While the most common gel blaster guns are assault rifles and submachine guns, we’ll take a look at the lesser known unsung heroes of the gel blasting world: the shotgun, handgun, and sniper rifle.

A shotgun is a relatively short ranged weapon traditionally used by the point-man; the first person to charge into a room.

The M79 shotgun from Hanke is a solid nylon build that fires in single or buckshot mode. It is entirely manual, requiring no batteries or gas.

The pump action shoots your gel balls at surprisingly high velocity at around 300 feet per second in single shot mode.

Switching between single rounds and buckshots is as easy as tipping the gun forward and pausing a little with the pump handle in a far back position, leaving some time for the gel balls to get in.

Some key features of the M97 by Hanke

With a 30cm and 7mm diameter metal barrel, the shotgun is excellent at close range of up to 25 meters. You can find the M97 here and at a very affordable $100.

A handgun is primarily used to back up the main weapon. If you’re cornered and have run out of ammunition, pulling out a handgun and firing is way faster than reloading the main weapon.

In addition, snipers often carry a backup handgun should they be chanced upon by any unsuspecting members of the opposing team.

Catapulted into the limelight, the Glock G34 used by John Wick in the second chapter is a high quality, light, handgun powered by green or top gas.

With a metal slide at the top and a nylon bottom, it fires gel balls with high precision at a speed of about 300 feet per second.

The G34 has both outer and inner barrels made of metal.

The inner barrel is 7.5mm in diameter, has a built-in hop up and ends in a 12 mm counter clockwise thread.

The firing mode is semi auto only, and the magazine holds 15 rounds.

Some key features of the Glock G34 by Double Bell

The John Wick 2 Glock G34 is one of the most solid and reliable gel blaster pistols available.

A top quality handgun, it is priced higher than its cheaper counterparts, and you can order it right here.

This excellent battery powered handgun has a unique feature; it comes with a flashlight which is also a 7.4 volt battery. The flashlight can be connected in series with the built-in battery, delivering a total of 14.8 volts.

The build of the Beretta is high quality nylon with a built-in rechargeable lithium battery. The flashlight also has a built-in battery and has to be charged separately.

A single button controls the mag primer and fire mode selector; a quick press switches mode between single shot and full auto, and a long press primes the magazine.

You’ll be able to get a firing rate of 10 rounds per second travelling at 145 feet per second in the 14.8 volt mode. This rate will empty out the mag in about four to five seconds on full auto mode.

Some key features of the Beretta 90two by SKD

If you are looking for a reasonably priced sidearm or small secondary weapon, you can’t go wrong with the Beretta 90two. It is available here for $120.

The word “sniper” comes from a group of 26 birds from the Snipe family. These birds are highly alert and easily startled, rarely remaining in the open.

The bird’s erratic flight patterns also added to the difficulties hunting them.

The challenges faced while hunting these nervous birds gave rise to the term “sniper”.

Sniper emerged as a noun in the 1770s and now refers to the hunting prowess of skilled sharpshooters making shots from concealment or camouflage.

The Rolls-Royce of sniper rifles, the Kar 98 by Double Bell is a gas-powered piece of art with a stock and body on a solid piece of wood.

While a small wooden fitting in the front is needed for assembly and disassembly, the Kar 98 shares the bolt action of the original Mauser Kar 98.

This gel blaster is gas-powered with five shells loaded with one gel ball each pressed into the mag.

Pulling the bolt back grabs the previous shell to eject it, lining the next one up.

Pushing the bolt forward loads the shell into the barrel, ready to fire.

The inner and outer barrels are metal; the inner barrel has a diameter of 7.35 mm and is 50 cm long.

This amazing rifle fires gel rounds at more than 400 feet per second and is accurate at up to 35 meters out of the box.

Some key features of the Kar 98 by Double Bell

The Kar 98 has amazing handicraft and build quality in addition to the high power and accuracy so needed for a sniper.

You can order this gel blaster guns amazing rifle right here at $585.

After 5 years in the industry we're taking a much deserved break. We will be closed from 23rd December to 2nd February 2022. Please note that all online orders received during this time will be processed upon our return. In the meantime here's a coupon for 10% off store-wide including FREE SHIPPING.

Wishing you all a very Merry Christmas and a spectacular New Year full of Light & Love.
Blessings!

- the Team at Renegade Blasters